15 of the Most Popular Idioms in Chinese

If you don’t have time to learn this now, you can download your 15 of the Most Popular Idioms in Chinese PDF and read it later!

Idiom comes from the Greek word meaning ‘one of a kind’. They’re often used to convey a special meaning that is not directly spoken. Idioms also shorten a longer meaning, and can add colour to a language and emphasis to a specific phrase.

Idioms, known as 熟语 (shóu yǔ) or 成语 (chéng yǔ) if made up of 4 characters in Chinese, are commonplace in both English and Chinese culture. Whilst some have crossed cultures and been translated literally, there are others which strongly reflect the cultural origins and have been translated to demonstrate Chinese or English traditions and history.

Below are 15 popular idioms in the English language, translated into Chinese. Some have been translated quite literally from their English origins, other have taken on a more ‘Chinese’ translation or use an existing Chinese equivalent.

This phrase is thought to have come from the 17th century, when dead animals would be washed along the streets during heavy rain. The meaning of the idiom is ‘heavy rain’, which feels like you’re being pelted by cats and dogs!

The Chinese version comes from the Tang Dynasty poet, 杜甫 (dù fǔ) Du Fu’s poem “白帝城中云出门，白帝城下雨翻盆。” It means the rain is as heavy as pouring away the water from basin.

Speak of the devil means to talk about someone, and that person appears unexpectedly. The idiom originated in England around the 16th century and comes from the phrase, ‘Speak of the devil, and he will appear’.

The Chinese equivalent comes from the story 《三国演义》(sān guó yǎn yì) Romance of the Three Kingdoms, written in the 14th century by Luo Guanzhong 罗贯中 (luó guàn zhōng) and predates the western use of the phrase. The tale tells of the Three Kingdoms during the breaking of the Han in 200 AD. 曹操 (cáo cāo) Cao cao is the leader of the Wei and the villain of the piece in contrast with the heroic Liu Bei, the leader of the Shu. The Chinese translation is literally, ‘speak of Cao Cao and Cao Cao arrives’.

This phrase means to be caught between two difficult situations or choices. The phrase originated in the early 20 century, relating to bankruptcy and the mining industry in Arizona, USA. Miners were said to have the choice to either work without pay or go unemployed and starving.

The Chinese version was originally seen in a Yuan dynasty (1271 – 1368) drama, 《潇湘雨》(xiāo xiāng yǔ) Rain on the Xiaoxiang River – “我欲待亲自去寻来，限次又紧，着老夫左右为难，如何是好！”

This idiom is said to have originated in China, but there are also stories in Greek mythology (the tale of ‘Daedalus and Icarus’) that suggests an earlier source for the term. Two birds with one stone means to complete two actions in one go.

The Chinese origin is said to have come from the Chengyu 一箭双雕 (yī jiàn shuāng diāo) meaning to ‘kill two golden eagles with one arrow’.

The origins of this phrase comes from a Christian saint who wrote in circa 390 AD, that on visiting Rome, he would fast on Saturday, which was not his normal custom, and that his friend should do the same to avoid ‘scandal’. The full phrase, When in Rome, do as the Romans do suggests that when travelling in another place with different customs than your own, follow the customs of the place to prevent offense.

The origin of this idiom, meaning ‘to address something head-on’ is hazy. Whilst some sources say it originated in the 19th century and is connected with bullfighting, others have connected it with rodeos in USA.

The Chinese version of the phrase, translates the meaning of the idiom, to ‘face difficulty head on)’ and comes from the story of 车胤 (chē yìn) written in the 晋 (jìn) Jin dynasty, who studies hard through poor family circumstances.

This idiom was popularised in the 1940s after it was used in several texts released during this time. The meaning is that you ‘cannot make a decision about something just on its appearance’.

The Chinese idiom which translates to ‘You can’t judge a person by appearance, just as you can’t measure the sea with a pint pot’, comes from the Story of the Journey to the West 《西游记》(xī yóu jì) Chapter 62 “陛下，人不可貌相，海水不可斗量。若爱丰姿者，如何捉得妖贼也？”

The phrase became well known in the 1920s when the song ‘The Grass is Always Greener in the Other Fellow’s Yard’ was released in 1924, however the origins of the idiom are said to have come from as far back as to the poet Ovid (43 BC – 17 or 18 AD) in his poem ‘Art of Love’.

The Chinese version of this idiom translates as lit. the next mountain looks taller and comes from the poem 《乡万解颐·地部》(xiāng wàn jiě yí·dì bù): “若这山看着那山高，畔援歆羡之词也。”

To ‘scrape the bottom of the barrel’ originated in the USA in the days before refrigerators when food was stored in barrels. The remainder of the food (which would no doubt be spoiled) would have to be scraped out with spoons (gross!) which produces the meaning, ‘to take an undesirable option because it’s the only choice’.

刮桶的底部 is a literal translation of ‘to scrape the barrel’.

This phrase, meaning ‘older people cannot learn as easily as the young’, originates from as far back as the 1500s, when it was mentioned in ‘The Boke of Husbandry’, written by John Fitzherbert in 1534.

This phrase was first seen in John Lyly’s ‘Euphues and his England’, 1580 “the Twinnes of Hippocrates, (who wer as lyke as one pease is to an other).”

The phrase ‘up shit creek’ originated during the 1860s when it was quoted by the Secretary of War that, “Our men have put old [Abraham] Lincoln up shit creek.” The phrase means to be in an almost ‘impossible or uncomfortable situation’

The phrase became popular in the 1920s after several authors, including Joseph Conrad and Aldous Huxley, used it in their work. However it is said to have been used first in William Caxton’s translation of Aesop’s Fables in 1484.

The Chinese version of this idiom comes from 《续传灯录》“一度著蛇咬，怕见断井索”.

Literally meaning ‘once you’ve been bitten by a snake, you’ll be afraid of a rope for ten years’.

This phrase originates from the Latin, ‘empus fugit‘ and was taken from the poetry of Virgil. It was used as a common proverb by the Romans which they translated as ‘time flees’.

The Chinese idiom translates to ‘time flies like an arrow’, meaning ‘time goes quickly (as an arrow) and was seen first in the Ming dynasty children’s book 《增广贤文》“光阴似箭，日月如梭”. The phrase is usually used to mean ‘there isn’t enough time to do something’.

If you have other idioms to share with us, please leave them in the comment section below! 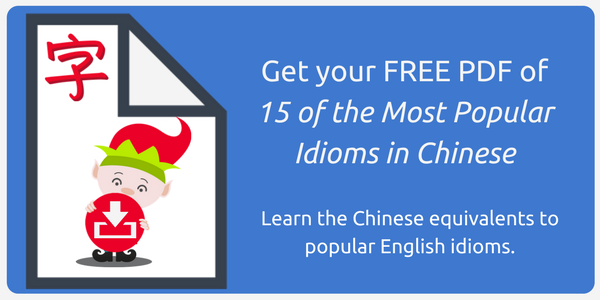