The Fascinating Conventions of Peking Opera

On December 8, 2017 By Hollie In Blog, Culture Lessons

If you don’t have time to read this now, get your The Fascinating Conventions of Peking Opera PDF and read it later!

Chinese opera 中国戏剧 (zhōng guó xì jù) has existed for hundreds of years, have their own conventions and individual style. Whilst there are various different types of Chinese opera, in the modern day, Beijing or Peking Opera is the most common type of opera and is said to be an amalgamation of the different opera styles in China.

Chinese operas are usually based on historical or mythical stories from the past and are a dramatic combination of music, singing, martial arts and acrobatics.

For foreigners, and even contemporary Chinese people, the meaning behind a Chinese opera often goes misunderstood, however, many Jingju actors often have years of training before being allowed to perform on stage.

Being part of an opera troupe 戏班子 (xì bān zi) is often something that is passed down through a family, so if your father and grandfather were involved in opera, then you were expected to join also. Training for children started at a young age and was often brutal, studying gymnastics, acrobatics, martial arts, singing and acting techniques from 5 am every morning.

Every movement, gesture and glance has symbolic meaning in Peking opera and is based on imitation or mime 模仿 (mó fǎng). For example, an actor walking around in a circle suggests a long journey.

So for example, each costume colour is created with a specific meaning in mind that the audience, having knowledge of these conventions will understand immediately:

Upon entering the stage from the east or west, actors will immediately walk to the ‘center north’ of the stage. A table and chair are the most common prop on the stage, although sometimes there will be a background to suggest a location. Furthermore, additional props may be used to indicate other objects such as a whip to suggest the presence of a horse.

Whilst other forms of Opera have masks to cover the face, Peking opera actors wear makeup. The method of wearing makeup to suggest a character‘s personality is known as 脸谱 (liǎn pǔ) or ‘the picture of hearts’ because the audience should instantly know what kind of person the character is. For this reason, the makeup worn by each character takes years of mastery by the actor playing the role. It is necessary for him to have a deep understanding of his character in order to make-up his face.

Although some cases, characters may just have one colour, a dot or line of makeup, some characters have intricately painted wings of butterflies, swallows and bats on their eyes and cheeks. Similarly to Peking opera costumes, the colour of makeup is extremely important: red symbolises loyalty, black for honesty and white for cunning.

Most of the language used in Beijing opera is an old form of Mandarin that originates with Zhongyuan Mandarin 中原 (zhōng yuán).

There are two different styles of music in Peking opera:

Xipi is sprightly and lively and is often paired with lyrics, narration and scenic parts of the opera. Erhuang is slower and deep and is often used to express melancholia and distressing situations.

However, there is very little difference between these musical styles, except for Erhuang being in a slightly lower tone. These use the same instruments and techniques including ‘manban’ 慢板 (màn bǎn), which is a mournful song commonly played by a 老生 (lǎo shēng) Laosheng.

The musical instruments are often set up on a table in front of the stage so that the orchestra is in full view of the audience. A performance will usually begin with a flute accompanying singing. Throughout the Peking opera, drummers are the main musicians who accompany acrobats, singers and martial artists.

The orchestra tends to be a small group of no more than 8 peopl playing the following instruments:

A flute known as the 笛子 (dí zi) would be played as an accompaniment to singing, as well as a 月琴 (yuè qín), a stringed instrument and the more commonly known, 京胡 (jīng hú), a 2 stringed fiddle.

There are very specific characters in Peking Opera, that in the past would have been played by men, regardless of if the character was male or not. The main four roles are Sheng, Dan, Chou and Jing 生旦丑净 (shēng dàn chǒu jìng). These roles were further separated depending on whether the character is good or evil, handsome or ugly.

The Sheng 生 (shēng) is the male character and is divided into four specific roles:

The Laosheng character is often gentle with good manners, and have a black or white beard. They would often wear a black hat of various shapes depending on the character’s status as well as a uniform-type costume.

Tan Xin Pei 谭鑫培 (tán xīn péi) was one of the most famous Laosheng actors in Peking Opera history.

Hongsheng are a version of the Laosheng but with a red face.

The Xiaosheng was a young handsome man who sings with a high-pitched voice. Depending on his position in society, his costume might be elaborate or plain and would wear a hat with long pheasant feathers.

The Dan 旦 (dàn) is a female character of which there are six more specific roles:

The Qingyi is the central ‘dan’ character of Beijing Opera and is proud, honest and an extremely important role. Their costumes were often yellow, and sing with a pure high-pitched voice.

Huadan characters are young flirtatious, unmarried women with coy expressions and flitting movements on stage. Her costume is made of a brightly coloured jacket and trousers.

Mei Lanfang 梅兰芳 (méi lán fāng) created new Dan character which was a combination of the Qingyi and Huadan. You can learn more about Mei Lanfang in our article, Mei Lan Fang: The King of Peking Opera.

The Guimendan is a young, immature girl. She misbehaves in a mischievous manner but has a shy manner.

The Daomadan is a warrior female and performs in a strong manner. She wears a military headdress and weapons.

A Laodan is an old woman. She does not wear any makeup, and her costume is often made of sombre colours and style.

The Wudan is an acrobatic character who wears a simple costume.

The Jing is a prominent character with a painted face of a high social class. He has a deep voice and a confident manner who can either be a good or bad role. The colours on his face would dictate what kind of character he was. Red for good, black for brave, white for cunning, yellow for brutal and blue for wild.

The Chou is a comedy character and comes in two types:

The Wuchou 武丑 (wǔ chǒu) is usually a vigilant and witty character, who is extremely good at Kung Fu. The character would be comparable to Robin Hood, who robs from the rich to give to the poor.

Share your experiences about Peking Opera with us below! 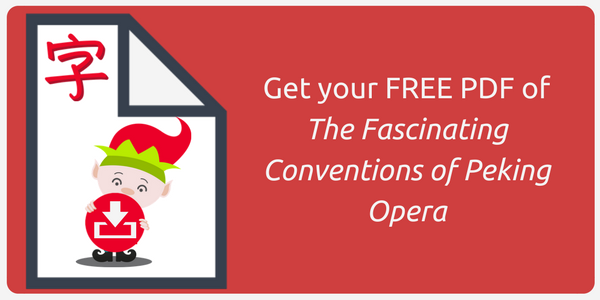