It will only take 6 minutes to read this post!

Don’t have time to learn this now? Just download your Conveying Passive Voice With The 被 (bèi) Character PDF and study later!

A passive voice is where the noun being acted upon becomes the subject of the sentence.

Active sentence: Hollie read the book in one day.

Passive sentence: The book was read by Hollie in one day.

The vase was broken by him.

These are the following types of 被 sentences:

The hat was blown away by the wind.

His wallet was stolen.

In this type of sentence, we can add 人 (rén) after 被, which means it is hard or impossible to tell the ‘doer’.

The door was locked by someone.

The news was soon forgotten by the people.

This book was borrowed by him.

This example is specific to written Chinese. Usually, an object should come after the 被 character within this sentence pattern.

The cell phone was broken by someone.

The features of 被 sentences

被 and 把 can be used interchangeably in some cases:

Similarly to 把 sentences, 被 sentences can not be transformed from any active sentence, there are certain conditions:

1) The predicate should be a transitive verb, and when followed by other words, and then 着,了, 过 or complement shows a result or status change.

The beer was drunk by my father.

The injured puppy was held inside the house.

If the sentence contains a disyllabic verb, there should be an adverbial modifier before it, such as an auxiliary verb, or time word, etc.

You may be misunderstood.

His article has been published by the magazine.

2) The object should be known by the speaker and listener, and sometimes can be modified by a demonstrative pronoun or other word

Those people are all deceived by him.

Today’s newspaper was taken away by someone.

She was not asked to watch the movie.

The lost kid has been found by the policeman.

4) In some situations, 被 can be omitted

However, when the object is a person, and the agent must be clarified, the 被 can not omitted:

The bread has been burnt by me.

Sometimes, 被 is not needed within a sentence, but adding 被 can express the unsatisfied emotion of the speaker to the object.

钱他花光了。(qián tā huā guāng le) He spent all the money.

钱被他花光了。(qián bèi tā huā guāng le) The money was spent by him.

2) Some transitive verbs, which express mental processes, can not be transformed into a 被 sentence, such as:

3) If the object is referent noun, it will not use 被 sentence, unless the speaker do not expect that happened

The letter was written.

The bowl has been washed. 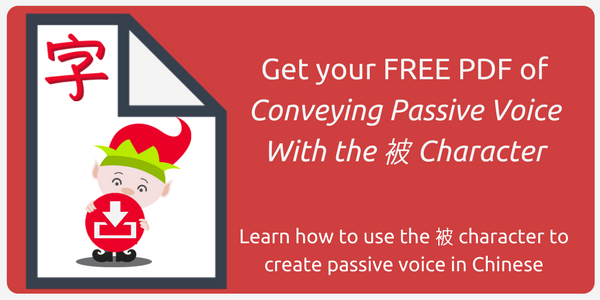