How to Use the 5th Chinese Tone

Don’t have time to learn this now? Don’t worry, just get your How to Use the 5th Chinese Tone PDF and read it later!

Did you know there was a 5th tone in Mandarin Chinese? Many Chinese learners just refer to this tone as having ‘no tone’ or being ‘neutral’. However, this ‘no tone’ actually has rules that can change the way a character or bigram is spoken. The way the 5th Chinese tone is used in spoken Chinese often comes naturally, but you can get to grips with how to use the ‘neutral’ tone by reading the following.

Modal particles are used in Chinese to reflect a specific mood and often use the 5th Chinese tone.

汉语呢？(hàn yǔ ne) How about Chinese?

她高兴得说不出话来了。 (tā gāo xìng de shuō bù chūhuà lái le) She was so happy she was unable to speak.

Read our article, The Complete Guide to Chinese Sentence Particles for more information about these Chinese particles.

头 (tou) is not often used in the fifth tone, but does so when it follows a noun, for example:

The 5th tone ‘儿’ is used after a noun to suggest something is small or cute.

The fifth tone is also used when 子 (zi) is added to a noun (which it is, often), for example:

3. Duplication of Nouns and Verbs

Verbs can sometimes be duplicated in Chinese to soften a suggestion or instruction. The second character takes a 5th tone to reflect the sentiment and tone.

看看 (kàn kan) means ‘to take a look’ at something instead of the more harsh sounding, ‘看’.

Verb + 来/去: means the direction of the action

2) Verb + 去 indicates that the action is heading away from the speaker.

Sometimes when location words, such as 上 (shàng) up,下 (xià) down and 里 (lǐ) in, are used with a noun they take on the 5th tone:

心里 (xīn li) in the heart

6. Pronouns used with a verb as an object

If a pronoun, you, he, it etc, is used after a verb the pronoun becomes a 5th tone:

个 is the standard measure word used with nouns in Chinese and uses the 5th tone. 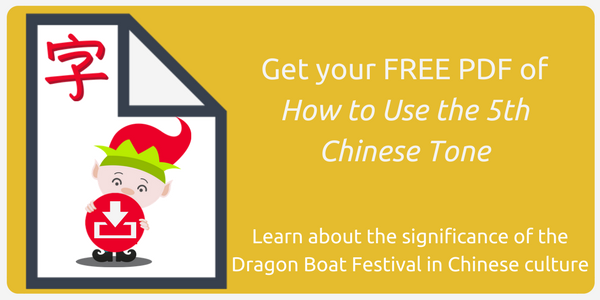