On February 2, 2018 By Hollie In Blog, Learner Tips, Radicals

It will only take 6 minutes to read this post!

If you don’t have time to read this now, don’t worry! You can get your 金字旁 Jin zi pang: The Metal Radical PDF and study it later!

Did you know there are 218 Chinese radicals? Although that sounds like a lot, many of them have a very specific meaning and can be extremely useful when learning to read (and write) Chinese characters. Often, a radical will ‘connect’ all the characters with that same radical, which helps you to remember them.

The following characters all have the 钅 radical on the left-hand side and are all related in some way to metals:

The character for silver combines the gold radical 钅 with the character originally meaning ‘only next to’ 艮 (gěn) (from 跟(gēn)), so that the meaning was ‘just after gold’.

The right-hand side of the character was originally 㕣 meaning ‘a marsh at the bottom of a hill.’ Perhaps this relates to lead resources.

The original character has 2 spears 戈 戈 (gē) on the right-hand side, that also represented power. The idea behind the character for money is that the ‘spear’ is breaking the ‘gold’ represented by the metal radical on the left. During certain periods of Chinese history, 戋 also meant ‘farm tools’, and before currency was used as a medium of exchange.

This character was originally made up of the ‘gold’ radial with the character ‘to bite’. It was changed to include the 十 particle to suggest a threaded needle.

Originally, the word nail was just a pictograph, 丁 (dīng), but the gold radical 金 was added later for clarification of meaning.

Originally,  鐘 (zhōng) (穜 (tóng)/ 种 (zhòng)) was the character to describe the bell rang during the autumn harvest. The bell would dictate a specific time of day. 中 (zhōng) also has a similar pronunciation to 种, so when characters were simplified, 中 was used instead of 童 (tóng).

请问现在几点钟了？(qǐng wèn xiàn zài jǐ diǎn zhōng le) Could you please tell me what the time is now?

The gold radical suggests the meaning, and the right side, 失 (shī) dictates the pronunciation.

The right side of the 锁 (suǒ) character includes 贝 (bèi) meaning ‘shell’ although in ancient China, shells were used as currency. You need to ‘lock up’ your gold and currency to prevent others from taking it.

The right side here is 竟 (jìng) meaning ‘unexpectedly’ but in this character provides the pronunciation of the character.  In ancient China, mirrors were made out of copper.

This is an interesting character to include the metal radical. Originally,  错 was the name of a decorative craft, which was inlaying gold or silver onto the surface of bronze ware. One of the stories about how 错 became to mean ‘mistake’, was that as gold and silver was much more expensive than copper, the idea of adding gold and silver to copper was nonsensical or ‘incorrect’.

If you found this helpful, we have several other radical articles that you might like to take a look at. 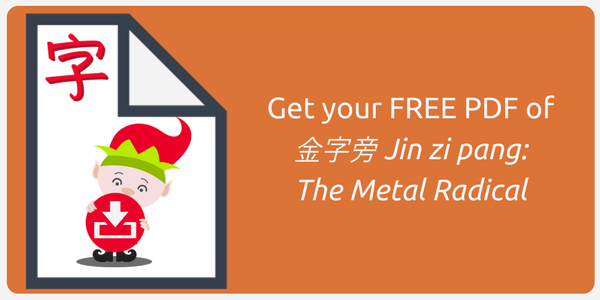