The Lowdown on the 6 Types of Chinese Characters

On September 1, 2017 By Hollie In Blog, Culture Lessons, Learner Tips 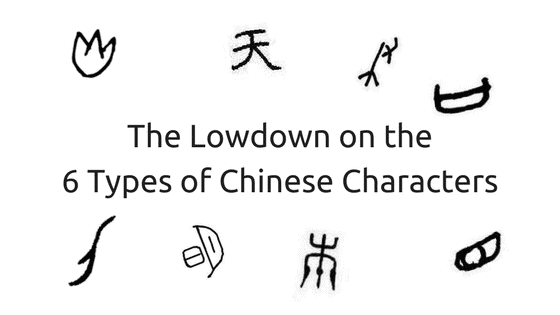 If you don’t have time to read this now, don’t worry! You can just download The Lowdown on the 6 Types of Chinese Characters PDF and read it later!

Very little is known about the origins of the written Chinese language. However, one of the most common stories is about the minister of mythical Emperor Huang Di, 仓颉 (cāng jié) Cang Jie, who allegedly saw the prints of birds’ and animals feet as being distinct and individual. He then draw his own pictures of objects relating to their shape. The first type of writing was called oracle bone script 甲骨文 (jiǎ gǔ wén) thought to have been used between 1500 and 1000 BCE. The script was etched onto turtle shells and animal bones, and then heated until they cracked. The Shang Dynasty courtiers would use the bones to tell the future.

There are six different kinds of Chinese characters, known as 六书 (liù shū). However, there are three main categories: pictographs, ideographs and determinative-phonetics. The additional three methods are known as combined ideograms, transfer characters and loan characters, which are less related to the structure of a character and more with usage.

Below is an explanation of the six different character types, when they were introduced into the written Chinese language, as well as examples of these characters.

The oldest character form are known as 象形 (xiàng xíng) ‘image shapes’ by the lexicographer, Xu Shen 许慎 (xǔ shèn). Some of the simplest objects to draw, where animals, tools and other natural phenomena, that we now call ‘pictograph’ characters. Not only did these characters show natural objects, but also showed cultural advances that were occurring in China during this time.

Some good examples would be 网 (wǎng) which shows a ‘net’. In an interesting modern twist, 网 (wǎng) is now used for the inter’net’.

These characters began to develop and showed 指事 (zhǐ shì) ‘indirect characters’ or ideographs that were more abstract. Xu Shen referred to these characters as ‘pointing to matters’. These abstract ideas were shown with metaphorical or symbolic pictographs.

For example, one line 一 (yī), two lines 二 (èr), three lines 三 (sān) etc to indicate numbers ‘1,2 and 3’, dots and lines added to horizontal lines to indicate characters such as As China developed quickly, Xu Shen created his most ingenious method of script known as 形声 (xíng shēng) which combined the pictogram with phonetics and was known as ‘determinative-phonetic characters’ or phonetic compounds. This allowed scholars to create an unlimited amount of characters and it was at this time that the evolution of the written Chinese script was almost complete.

Here are some example of how these characters work:

The character 木 (mù) is nearly always the ‘determinative’ in a compound word. This means that the compounds are almost always associated with wood or something wooden. 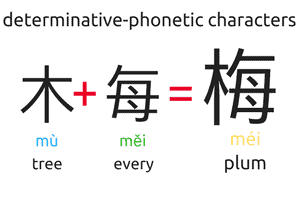 Since the number of determinatives are relatively small, the ‘radical’ system was created by Xu Shen and 说文解字 (shuō wén jiě zì) the Chinese Dictionary was completed in 121AD and included 540 radicals or 部首 (bù shǒu). During the Ching dynasty (1644-1911 AD), these 540 radicals were reduced to 214, and these still exist today.

One of the changes that occurred to the Chinese language, was the phonetic pronunciations of some characters that are almost unrecognizable to the original phonetics.

A good example of this is the phonetic of 工 (gōng) which means ‘work’:

Here are some more examples of 会意 (huì yì) characters: These compound characters do not usually take phonetics from either pictograph or ideograph within the character.

转注 (zhuǎn zhù) ‘transfer’ characters are the most difficult to explain and are the least understood. These characters could be interchangeably with each other due to them sharing the same radical and having a similar etymology. The final category are the 假借 (jiǎ jiè) or ‘loan characters’. This method ‘loans’ the physical character of a homophonous word. A homophone is a word that sounds similar, but have a different meaning.

For example, back in the day, there was no character for the abstract idea of ‘to come’. Since there was already an existing character with the same pronunciation, 莱 (lái), the cereal plant was ‘loaned’ to the new character, 来 (lái).

The original meaning of the character 西 (xī), that now means ‘west’, was a bird in a nest. 许慎 Xu Shen said that the bird rested in the nest when the sun was in the west and therefore gave the character over to ‘west’.

The Evolution of Chinese Characters

The evolution of Chinese characters is an long and interesting one, but can usually be split into 4 separate stages:

At this stage, Chinese script were pictographs from objects and have said to have originated more than 10,000 years ago.

There is evidence that suggests pictographs were completed between 5000 and 6000 years ago.

During this time, determinative- phonetic characters begin to appear and continued for around 1600 years. It is also in this period when the Chinese script completed its structural evolution.

Both the structural and formal evolution is now stable, however, the determinate-phonetic characters continue to develop.

After the introduction of 楷书 (kǎi shū) standard script during the Wei and Jin Dynasties, few changes have been made until the early 1950s. 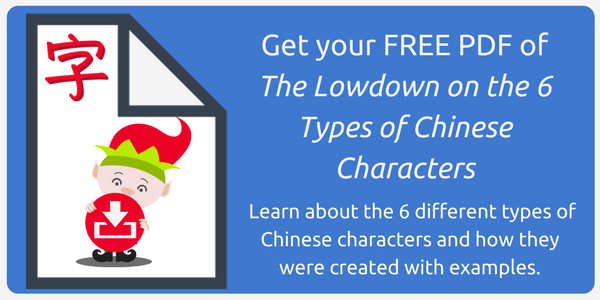