Secrets to Remembering EXACTLY How to Write a Chinese Character

On June 2, 2017 By WrittenChinese In Blog, Learner Tips

Many people think that they have “bad memories”, but did you know that most people have strikingly similar memory capacities? 1The way that we use our memories is far more important than our brain’s genetic makeup.

Our brains our wired to be associative, meaning that we remember best when we can connect a memory to something that affected us emotionally. Unfortunately, written Chinese is taught for the most part through rote learning which is basically just repeating something over and over again. This type of learning is hard and unnatural. It does not work well for non-native speakers, especially for those who are learning Chinese as adults.

Remember that you need to not only learn but also be able to recall at least 4000 Chinese characters to read at even the most basic level. If you aren’t getting where you want to be in your studies, stop beating yourself up about how you need to simply study more. What you need isn’t more study time, it is a change of technique.

To recall characters with ease, you must learn to use your brain as it was intended to be used. You must make your Chinese learning associative. For each character, you must create a story that depicts its meaning. If the story is funny or interesting to you, then it will not be burden to remember it.

Just like with any new memory technique, it takes a bit of practice. After you have done this for 20-30 characters, it gets much easier and you’ll be able rapidly increase the amount of characters you can learn and retain for the long term.

Here’s how to create associative memories with Chinese characters:

First you need to realize that you will have to memorize some odd shapes. There are some Chinese learning programs out there preaching that all Chinese characters look like what they mean. Sadly, this is true for only a small handful of characters, most of which aren’t even used with regularity in modern Chinese. You need to come to terms with the fact that you’ll have to learn radicals as you learned the English alphabet; A is for “apple” just as 艮 is for “hill”.

There are about 200 of these radicals that you’ll learn, which initially seems like a lot. Keep in mind that 200 is a much more manageable number than the 4000 characters you might be trying to cram into your head. If you think about it, probably you can easily recall 200 symbols in your native language. Consider the alphabet’s 26 letters, the numerals 0-9, and symbols like $, +, ÷, ≥, ©, etc. When you see these symbols, you don’t have to think about what they mean, they just instantly have a meaning to you. This is what the radicals will become for you.

You can also tap the LEARN MORE button in the online dictionary to get a breakdown of the radicals included in any Chinese character.

Once you know the radicals used in a character, use their meanings to construct sentences or stories that help you associate the character with its definition. You can even add a hint to the pronunciation of the character in the story, or even multiple meanings for characters that have a broader meaning. The point is, the sentence or story must be meaningful to you. In this way, it becomes hard to forget.

This is an example where the radicals neatly fit into a silly story. You can see from the image that the character 糕 (gāo) has 3 radicals: 米, 羊, and 灬. We can see the meaning of each radical incorporated into the sentence in orange. The definition of 糕 (gāo) is “cake”, and we can see that in the sentence in purple.

Here are some more examples where the radicals can relatively easily fit into a simple story:

As you build up your stories, it will become simpler to create new ones because you can incorporate the stories that you’ve already created into new ones. For example, if you look at the character, 理, you can see that there are 3 radicals: 王, 田, and 土. You could create a story with these radicals. But if you’ve already seen and learned the character 里, then you can build a story based off of the 王 radical plus 里.

Using the story we’ve already created above for 里, we can create this story for 理:

So far in the examples above, the radicals used can be incorporated into a story without too much effort. Unfortunately, sometimes there will be cases where part of the character is not a radical at all. In this case, you can examine the shape and think of a way to incorporate that shape into the story.

The hook at the top of the right side of the 候 character, reminds me of the number 7 so I have incorporated it into the sentence to remember how to write the character.

In this last example, the 觉 character can be pronounced in two different ways and has two distinct meanings. This is why both definitions are incorporated into the story.

In the beginning, creating stories to help you remember Chinese characters challenging. After you have created a handful of stories, it gets much easier and quickly becomes second nature.

Click the LEARN MORE button next to any dictionary entry and scroll down to find the comments section. We use Disqus for our comments, so you can even follow other learners and get notified when they add something to these pages.

As always, happy studying everyone! 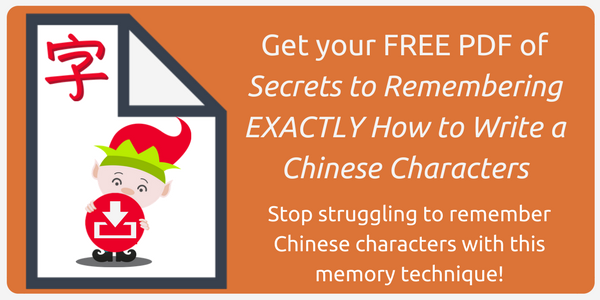