On March 17, 2017 By Hollie In Blog, Culture Lessons, Vocabulary

If you don’t have time to read this now, don’t worry! You can get your What You Need to Know about Internet Culture and Gaming in China PDF and read it later!

Internet Culture and Netizens in China

It’s fair to say that China, more than any other country in the world, has fully embraced the wonders of the internet. Nowhere else in the world do I know where you can order a cup of tea on a ‘mini-app’ on messenger app, WeChat and have it delivered free of charge 30 minutes later. I can’t think of anywhere that has aced the art of e-commerce more than Taobao, the website and app where you can get anything from your standard cosmetics and kitchen appliances to hiring a woman who will come to your restaurant and peel your hairy crab (for a tip she’ll even feed them to you). China has 710 million netizens, which is more than half the population, so it’s hardly surprising that they are prolific commentators, even going as far as to have running ‘discussions’ whilst watching TV shows online.

In recent years, China has seen a shift from computers to mobile devices, especially, since Tencent, the company behind QQ and WeChat began taking over the world with app development. Most Chinese internet users are watching movies, listening to music and gaming, unlike the western market, who mostly use their mobile phones for productivity and work.

Companies like Tencent cater to the Chinese market allowing their users to do EVERYTHING from within one app. WeChat allows you to chat with friends via text, voice and video, play games, post your pictures, not to mention pay for products online and in-store using WeChat Wallet.

The most recent addition to WeChat is the ‘Mini Program’, that allows you to pin a ‘mini-app’ to the top of your chat, so that there’s no need to even close WeChat to order food, check when the bus will arrive or see the best restaurant in the area.

Although games consoles such as Microsoft’s Xbox were, until recently, not available to buy in China, gaming is still a huge part of Chinese culture for many young people.

For many, owning a computer is still fairly unattainable, which is why China has become inundated with internet cafes 网吧 (wǎng ba), predominantly full of young men eating 方便面 (fāng biàn miàn) and chain-smoking. With fast speed connections, these internet cafes have allowed gamers the opportunity to play online for an hourly rate 24 hours a day. There have been many stories within the last few years about the ‘addictive’ effects gaming has had on teenagers and young people especially in China, sometimes even resulting in death, which in turn has seen the introduction of unconventional Game Addiction Rehab Camps.

Since most Chinese gamers have never gotten their hands on games that are popular in the west, such as first person shoot-em-up Call of Duty, Chinese gaming companies have been able to saturate the market with their own games. Chinese gamers are mostly playing real-time strategy games or MMORPGs (Massive Multiplayer Online Role Playing Games), like World of Warcraft. Even if other game genres were available to play, they wouldn’t be free, unlike the RPGs available online in China, and it seems they might just find the likes of Fallout 4 and Halo to be extremely boring…

键盘侠 (jiàn pán xiá) Keyboard ‘Hero’ – someone who uses their keyboard to create a ‘persona’ to troll sites, but in real life they’re no-one.

逗比 (dòu bi) Funny man – Someone is funny, silly and a little cute

白莲花 (bái lián huā) ‘White lotus’ – someone who is pure in appearance, but opposite inside.

圣母 (shèng mǔ) ‘Goddess’ – Originally a woman who would sacrifice herself to protect others. Now commonly used to describe someone who sacrifices others to ‘save people’, or be generous at the expense of others to implement his / her moral superiority or purpose.

水军 (shuǐ jūn) ‘Navy’ – People create ‘heat’ for a specific celebrity and control the direction of the conversation. Similar to paying for ‘LIKES’ on Facebook. 水 (shuǐ) previously had a negative meaning, which was to talk about irrelevant topics in forums.

脑残粉 (nǎo cán fěn) Fanboy / fangirl – Obsessive about one topic, and can sometimes make comments which may affect their ‘idol’ in a negative way

The following commonly used chengyu now use English words with a similar pronunciation to replace the Chinese characters, whilst retaining the original meaning.

颜值 (yán zhí) – ‘face score’ – To give someone’s face a score, for example 高颜值 is beautiful or ‘high scoring face’.

膨胀 (péng zhàng) ‘To be selfish’ – A person who jumps into a game too quickly and aggressively, often resulting in a quick death

Learn more internet slang in our article on Chinese Internet Slang and if you’re interested in learning about computer vocabulary, check our Stop being a Noob and Learn Computer Words in Chinese vocabulary list. 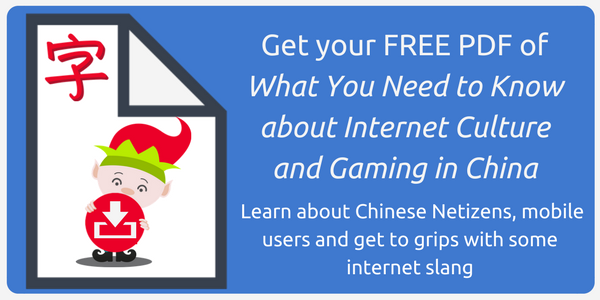