10 Things You Didn’t Know Were Invented in China

If you don’t have time to read this now, don’t worry! You can just download 10 Things You Didn’t Know Were Invented in China PDF and read it later.

The first Chinese Dynasty, 夏朝 (xià cháo) Xia Dynasty, was founded in 2070 BCE, although settlers had existed within China for thousands of years before that. Communities would live beside the 江河 (jiāng hé) Yangtze and the Yellow rivers, which now boast archeological findings of farm lands dating back to the 7th Century BCE.

Around the 4th Century BCE, walled communities were being built, and the first signs of primitate Chinese characters appear. By 2500 BCE, impressive technological advancements had been made, including the potter’s wheel, production of jade into ornaments and jewellery and works made of copper.

These were some of the earliest inventions made by Chinese settlers and led the way to the advancements in technology that we still rely on and appreciate today.

China considers themselves to have four great Chinese inventions: paper, printing, magnetic compass and gunpowder, known as 四大发明 (sì dà fā míng). Although this article touches on these four inventions, there are many other less well known inventions that came from China.

Here are ten inventions made in China that you may not know about!

Ketchup may be a strange place to begin invention-wise, but this is one creation that has surprised me the most. Although the ketchup we know and love today is certainly different to the one that was tried by the British around the 18th Century, taken home and copied. For a start, tomatoes weren’t added till 1812, when scientist James Mease added them to his recipe.

The word ‘ketchup’ is said to have come from the Hokkien Chinese, more commonly known as 福建话 (fú jiàn huà) ‘Fujianhua’, word ‘kê-tsiap’ which described a type of sauce made from fermented fish (yummy!). Although the Hokkien translation has since died out, the pronunciation tsiap pronounced ‘zhī’ (汁) in Mandarin is still used today to mean ‘juice’. Before the British arrived, Fujian sailors took the sauce with them to Malaysia and the Philippines along with their red rice wine, where it became part of their local cuisine.

Some time ago, I was watching the TV drama ‘The Vikings’, when in one of the episodes, the main character, Lothbrok uses a ‘sunstone’ to navigate the treacherous waters. The sunstone refracted light to create a double image, but when held at a certain angle, would create a single image, meaning the crystal was pointing east-west. Although there has been much discussion over the validity of the ‘sunstone’, evidence has been found to suggest they did exist.

However, it wasn’t until the 汉朝 (hàn cháo) Han Dynasty 206 BCE–220 AD when the first ‘magnetized’ compass, known as the ‘south pointer’ was invented.  A spoon was carved out of lodestone, a type of magnetite, and placed on a square made of bronze. When the bronze plate was moved, the ‘spoon’ would spin, eventually landing north-south, with the handle landing south. The lodestone aligned itself with the Earth’s magnetic field allowing it to be used as a compass.

Although the Ancient Chinese compass was originally used for telling the future, it was also used for navigation, although this was not recorded until the 宋朝 (sòng cháo) Song Dynasty (960 – 1279), approximately 1000 years after its creation. Unlike the Viking’s ‘sunstone’, it could be used in any kind of weather, as the ‘spoon’ would always point south.

The first seismograph, according to records, was invented by 张衡 (zhāng héng) Zhang Heng, a scholar who specialised in astronomy and maths during the Han Dynasty. The ancient Chinese believed that earthquakes were caused by an imbalance of Yin and Yang. Because of his scientific studies, Zhang was able to discover that earthquakes were actually a natural phenomenon, and developed his seismograph to react to the initial tremors of a quake. The seismograph would shake, causing a ball to fall from a dragon’s mouth into the mouth of one of the toads. Because there were 8 dragons and 8 corresponding toads, the seismograph could also detect the direction from which the earthquake was coming. If the ball fell from the easterly dragon, then the quake was coming from the west. Sadly, due to superstitions of the Ancient Chinese, his invention was mostly feared, even when he proved the effectiveness of the detector when it ‘predicted’ an earthquake in 138 AD.

The toothbrush was invented in 1498 (although some sources state it was as early as the 唐朝 (táng cháo)  Tang Dynasty (619-907)) and was made from hog hairs attached to a bamboo handle. Boar bristles were still used up until 1948 when nylon bristles were introduced! It took several centuries before the toothbrush arrived in europe, where most people were using rags rolled in soot or salt!

Even before the toothbrush was invented, the ancient Chinese were concerned about their oral hygiene and used ‘chew sticks’, which were multifunctional twigs with one end frayed for brushing, and the other sharpened as a toothpick.

Yes, seriously. The ancient civilisation who now uses two sticks for eating, also invented the fork. Bone forks have been found as far back as the Xia Dynasty (4205-1760 BC). Although the fork was exclusively used by the ruling class, eventually because of the nature of Chinese cuisine, chopsticks became more popular. It wasn’t until the 11th Century AD that the fork arrived in Venice, for the wedding of Byzantine Princess, Theodora Anna Doukaina.

I recently listened to a podcast about the history of toilet paper in the USA, which is fairly recent, so I was surprised to find that toilet paper has existed in China whilst the rest of the world was using wood shavings and sponges-on-a-stick (gross!). Since the manufacturing of paper occurred in China around 100AD by 蔡伦 (cài lún) Ts’ai Lun, is seems only right that they should also go onto invent toilet paper. Toilet Paper seems to have been first used in the Tang Dynasty and was recorded in 《中国印度见闻录》(zhōng guó yìn dù jiàn wén lù) by Arabian writer, 苏莱曼 (sū lái màn). During the 14th Century, 洪武 (hóng wǔ) Emperor HongWu allegedly had toilet paper perfumed for his household.

The Ancient Chinese were said to have been drinking beer 9000 years ago! Rice, hawthorns and honey were brewed to make a 4-5% beer that was very popular during the 夏朝 (xià cháo) Xia Dynasty. Once brewing improved, yellow wine started to appear during 战国 (zhàn guó) the ‘Warring States Period’ (475-221 B.C.). According to Chinese legend, however,  仪狄 Yi Di, an officer of the first Emperor, Yu 大禹 invented alcohol in approximately 2100 BCE. It was said that 大禹 drank so much that it affected his ruling and 仪狄 was sent away.

Yup, you read correctly. A rocket.

The Chinese had invented gunpowder during the Tang Dynasty in the 9th Century AD and had begun experimenting with gunpowder filled bamboo attached to arrows, launching them from bows. They soon realised that the bamboo could launch itself from the escaping gases, and the first ‘rocket’ was born! Although the rocket was initially used a weapon by the Chinese against the Mongols in 1232 AD, there is a legend that Chinese official 万户 (wàn hù) Wan Hu invented a rocket-powered chair. His plan was to visit the moon, although it seems more likely that he was blown to smithereens on take-off.

Yes, the game apparently played by the British using a pig’s bladder as a ball, was actually thought to be invented by the Chinese.

The game was invented during the Song Dynasty (960 to 1279 AD), and was known as 蹴鞠 (cù jū) ‘kick-ball’. One form of kickball, was to keep the ball in the air for as long as possible, another, more like the game we know today, was to pass the ball from player to player before putting it in a goal. Kickball was taken extremely seriously, clubs existed with managers and trainers, and the teams were made up of wealthy young men from good families.

You can learn more about Football in China in this BBC article and documentary.

With the invention of paper, came the eventual ability to print. During the Tang Dynasty (618-907AD), engineers used wooden blocks to print onto silk and were soon copying Buddhist texts.  In 762, the first printed books were sold in the markets of Chang’an, the capital at the time. Paper money also appeared sometime during the 700s. Wooden block printing was limiting, but moveable-type printing was invented by 毕升 (bì shēng) Bi Sheng in 1041 AD.

If you know of other Chinese inventions, share them with us below! 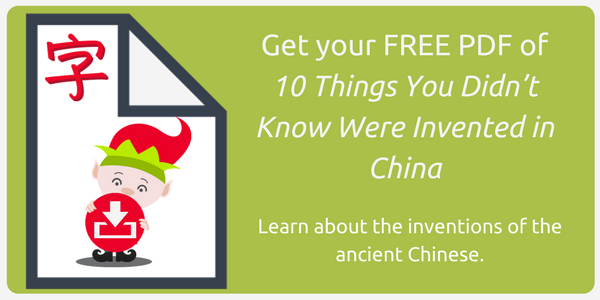