Traditional Chinese characters 繁体字/繁體字 (fán tǐ zì) can be considered any Chinese character that were not modified or ‘simplified’ during the 1950s and 60s. The mainland of China now uses Simplified Chinese characters, also known as 简体字 (jiǎn tǐ zì). The 体字 (tǐ zì) that can be seen at the end of both words means the ‘body’ or ‘form’ of a letter.

So, if Traditional Chinese characters were changed, there must have been a good reason, right? Well, one of the main reasons, was to help with literacy in China, since there was a large proportion of the population who could neither read or write Chinese.

1. Use Traditional Characters to Learn Simplified Ones

Let’s look at some examples of traditional characters that will help your understanding of the simplified character:

The character 东 (dōng) means ‘east’, but how does it have anything to do with ‘east’? The traditional character, 東 (dōng) gives us a better idea of how the character off ‘east’ came to be. For a start, you can break the character into 2 pieces, 木 (mù) meaning ‘tree’ and 日 (rì) meaning ‘sun’. How do these radicals help up? Well, ‘east’ was the direction that the sun rose every morning and man would see the sun rising through the trees, and so the character for ‘east’ became 東 (dōng).

Another example is 义 (yì), the character for ‘justice’. Although you can interpret the simplified character as being ‘balanced’ and therefore ‘just’, the traditional character, 義 (yì) is much more interesting. The traditional character shows a ‘sheep’ 羊 (yáng) above a person represented by 我 (wǒ) meaning ‘I’. It could be read that a person needs to be a docile sheep in order to receive justice.

Yes, I know I said I wasn’t really going to take sides, and within my first point I’m almost certainly cheering for traditional characters. But, if you’re studying Chinese characters to seriously understand them, and not just to memorize without really ‘getting’ it, then this is something you not only need to do, but I bet you 5 kuai you’ll even WANT to.

Just so I don’t appear completely biased, although the simplification of Chinese characters takes away some meaning of its traditional counterpart, some simplified characters took on the modern values of China, instead of focusing on the past.

Even though to many people, this is still a distortion of a written language, it’s interesting to look at it from a cultural perspective, to see how values changed via the written language.

A good (or bad depending on how you look at it) example of this is the character for ‘love’ 爱 (ài). The traditional character 愛 (ài) has an additional radical, A HEART! How can you have love without a heart you may ask? Well, during the time when the written Chinese language was simplified, the ideals of friendship and cooperation were more associated with love than traditional romance. This is reflected in the simplified character for love with the emphasis on the hands, rather than the heart.

As I briefly mentioned above, traditional Chinese characters are an amazing insight into Chinese history and culture. To me, this makes learning the written Chinese language even more enticing and interesting and has kept me engrossed in studying the language for many years.

Of course, this might take a bit of research on your part, so you can more fully appreciate Chinese history. I have to be honest, I’m not a Chinese history buff, but I have learned enough about ancient China to appreciate these connections.

A nice example of this, is the character 贝 (bèi) meaning ‘shell’.

Did you know that in ancient China, shells were used as currency? Shells were colourful and deemed as valuable, so they were used to pay for goods until the Shang dynasty in 1675 BC.

The traditional character 貝 looks more like a shell and can be found in many ‘money’ related characters such as 贵/貴 (guì) meaning ‘expensive’ and 买/買 (mǎi) and 卖/賣 (mài) meaning to ‘buy’ and ‘sell’.

If you didn’t know that shells were used as money, would you still be able to make sense of the characters? Perhaps you could, but the traditional characters add an additional element that sometimes makes learning characters similar to that of working out a puzzle. (Personally, the intrigue appeals to my love of mysteries and crime fiction).

If you’re as fascinated by this as I am, you might want to take a look at a series of books called Fun With Chinese Characters. The books look at the transition from traditional characters, sometimes even as far back as the bone oracle character, and explains some of the cultural relevance behind the characters, and how this has changed with the simplified.

One of the more popular reasons for learning traditional Chinese stems from an appreciation for Chinese art and literature.

Chinese Calligraphy is also known as 书法 (shū fǎ) is one of the highest forms of art in Chinese culture. Calligraphy combines the discipline and training of 气功 (qì gōng) with the lines and form of the Chinese written language. Although there are many forms of calligraphy, traditional characters are used to enhance the beauty of written Chinese.

Although many ancient texts have been translated into simplified characters, many people feel that reading poetry or works such as Four Books and Five Classics 四书五经 sì shū wǔ jīng) is more authentic when read from traditional Chinese characters.

Since these places still use traditional Characters, it may make sense to learn them if you live or intend to live in either place.

Although traditional character are rarely seen in the mainland of China, during some festivals, cities that played a major part in China’s ancient history, such as 开封 (kāi fēng) Kai Feng, may display banners and signs written in traditional Chinese characters to reflect the importance of the past.

If you’re just beginning to learn simplified Chinese characters, and are now panicking that you’ve done it wrong, there’s no need. Even if you didn’t realize the significance of traditional Chinese characters and how they can help your learning, that’s fine! Looking at traditional characters, from my experience, came naturally in an endeavour to understand (AND remember) the characters more fully.

By no stretch of the imagination do you now need to go out and learn TWO sets of characters (unless you choose to), however since there is quite a lot of overlap between traditional and simplified, it’s not impossible.

I’m sure many of you out there can come up with a lot more than 4 reasons why we should take a look at traditional characters, so please share your thoughts below. 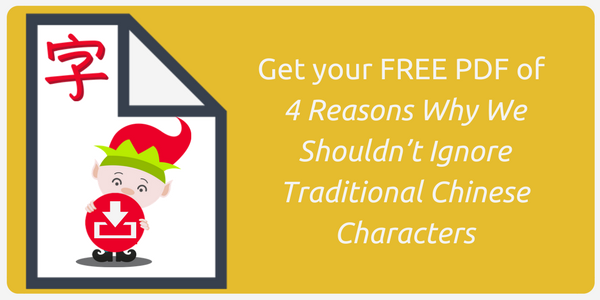