If you don’t have time to learn this now, don’t worry! You can get your Common Chinese Characters You’ll Definitely Find in Chinatown PDF and read it later!

Chinatown is a great way to begin looking for Chinese characters in your home country. You’ll find useful characters or bigrams (2-character combinations) repeated frequently, which is handy if you’re a beginner studying Written Chinese!

Most of these common Chinese symbols are found as traditional Chinese characters, but it’s often helpful to look at the traditional version of a character, even if you’re learning simplified characters.

The examples below have been found in Chinatowns around the world, so next time you’re in Chinatown, lookout for these common Chinese symbols and you’ll know their meanings!

Two of the most common Chinese characters found together in written Chinese are 中国 (zhōng guó) or ‘China’. 中 (zhōng) means ‘middle’, whilst 国 (guó) means ‘country’, but in ancient times, was also used for ‘capital city’. China is often referred to as the ‘Middle Kingdom’, but this is not an egotistical reference to being the centre of the world, but describes the Luoyang Basin. The basin was considered to be the central point of the ‘known’ world, which in Chinese culture was seen as being righteous and balanced. Just look at the Chinese character 中 and consider the balance of the character.

‘Chinatown’ is sometimes translated literally into ‘中国城’ ‘Chinatown’, although it is more commonly found written as the colloquial 华埠. ‘華 is used as an alternative word for ‘China’, used by the Han people, but is now associated with something that is not geographically related to China. 埠 means ‘wharf’ or ‘port’.

When Chinese immigrants arrived in the USA and UK during the diaspora, they would often keep themselves to 2 or 3 streets, known as 唐人街 (táng rén jiē) or ‘the streets of the Tang’. Tang refers to the Tang dynasty 唐朝 (618-907) which was an imperial dynasty said to be the ‘high point’ of Chinese civilisation.

馆 (guǎn) is a word used in a similar way to 店 (diàn), although 馆 is often a place where you can sit and use the establishment such as a 咖啡馆 (kā fēi guǎn) ‘coffee shop’ or 餐馆 ‘restaurant’. 旅馆 (lǚ guǎn) can also sometimes be used for ‘hotel’.

酒家 (jiǔ jiā) is a phrase rarely used in modern Chinese but was used to express ‘restaurant’. This is still commonly found in Chinatowns around the world. You’ll find a cheaper, more casual place to eat and drink than a 饭店 (fàn diàn).

Although 饭店 (fàn diàn) is sometimes used as a place with accommodation, 酒店 (jiǔ diàn) is also used for a ‘hotel’. 酒店 (jiǔ diàn) translates to ‘wine inn’ and was traditionally a place to eat, drink and sleep before continuing on a long journey.

天下 (tiān xià) means ‘the land under heaven’ and was first seen in texts during the Zhou period ((1046–221 BCE). The phrase 天下為公 was used as a social commentary that the world should be owned by the people. This goes back to the hereditary inheritance of the ‘throne’ or leadership role during the Chinese dynasties. The people believed that the leader should be the most ‘able’ and virtuous person, not given the position based on the blood. This led to the social ideal of 天下為公 .

YOKOHAMA, JAPAN – AUGUST 15, 2015: Yokohama’s Chinatown district at night. It is the largest Chinatown in Japan.

Chinatowns around the world put up decorations and have celebrations on the street during Chinese New Year. During this time, you may see 新春快樂 literally meaning ‘Happy Beginning of Spring’.

Have you found other commonly occurring Chinese characters in a Chinatown or your local area? Share the characters of your photos below! 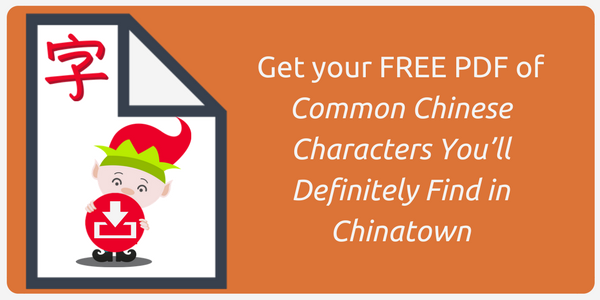 “I love you” in Chinese Gift Necklace