How to Handwrite Chinese Characters with Finesse

If you don’t have time to study now, don’t worry! You can get your How to Handwrite Chinese Characters with Finesse PDF and read it later!

When we first start handwriting Chinese characters, we’re often unprepared and lack the knowledge to know how to begin. It’s difficult to comprehend if English or other Germanic language is your native tongue, the subtle nuances of strokes in a Chinese character. When we learn to write English, there are only 26 letters to learn, and only several may cause issues based on line and shape. For example, as youngsters we might struggle with the difference between ‘v’ and ‘u’, not only because they have a similar shape, but because they’re next to each other in the alphabet. Furthermore, regardless of whether you handwrite or type a letter in English, it is still the same ‘letter’ and isn’t classed as wrong because you add an extra twiddle to the end of a ‘d’ or write the letter ‘m’ with sharp edges instead of smooth curves.

However, this is not the case with written Chinese. Different font types, especially minimalist styles, often make it difficult for an inexperienced student of Chinese to see slight differences between stroke types and order. Which means that eventually, we are handwriting Chinese characters incorrectly, because it is these nuances that ‘makes’ the character.

A good example is the character 子. The typed version makes the character like very vertical and rigid, and this is how many students would write this character when they first begin. Of course, that’s only natural! How else should we learn but by copying the characters that we see?

However, if we look at the handwritten form, you can see some obvious differences.

We can see that the ‘vertical’ section of the character is not really vertical at all, but more curved. In fact, the whole character is very slightly tilted.

Although writing the character as the typed font shows will not result in accidentally getting mistaken for another character, it lacks the finesse and aesthetics that the handwritten Chinese character should have.

Before you throw in the towel and think that you might as well give up now (Oh no, another hurdle!).

My point is, in order to learn how to handwrite Chinese characters correctly, instead of following printed fonts, follow stroke animations such as the ones we have on our online dictionary and app.

The 一 ‘heng’ stroke should be smooth and steady, as it works to balance a character, if 一 is uneven, then the character will be unstable. It is not meant to be written exactly horizontal and should actually be slightly lower on the left side and higher on the right.

Start with the pen heavily on the paper, wield the pen lightly to the right, and end heavily.

The ‘short’ heng stroke is the third stroke found in the internal part of the 同 character.

The ‘long’ heng is the first horizontal stroke.

丨 should be a vertical stroke, as it works to support a character. If 丨 ‘shu’ is not completely vertical, the character will be not straight.

There are 3 styles of 丨 ‘shu’ stroke:

Start by adding pressure to the pen, move the pen lightly in a vertical motion, and end by adding more pressure.

The Drewdrop stroke is the third, vertical stroke.

Start heavily, wielding the pen vertically from heavy to light pressure, and end with a sharp point. The speed of writing is from slow to fast.

The suspended needle is the fourth, downward stroke.

The method of writing this stroke is similar to that of the ‘Dewdrop’, but finish the stroke with a ‘stubby’ end. There are two styles: one is vertical and the other slants slightly to the bottom right.

The ‘short shu’ is both the second and fourth strokes in the 走 character.

The second type of ‘short shu’ is found in the 只 character as the first stroke.

丿 can help increase aesthetics and balance of the character.

There are 3 styles of 丿 stroke:

Add pressure at first then move the pen lightly down to the left and end with a sharp point. Begin slowly and then increase the pace when ending the stroke.

The first stroke of the 人 character is an ‘inclined’ pie stroke.

Begin the stroke heavily, then wield the pen down with light pressure until ⅔ of the way down the stroke. Turn down to the left, and end with a sharp point.

The vertical ‘pie’ is the first stroke of the 川 character.

The method of writing ‘short pie’ is similar to the ‘inclined’ style, but shorter. It often appears in the top left of a character.

The short ‘pie’ is the first stroke of the 年 character.

The stroke always appears on the top of the character, which is flat.

The first stroke of the character 千 is a flat ‘pie’ stroke.

The 乀 ‘na’ stroke is a little hard to write, as it is not always easy to control the thickness of the stroke.

There are 3 styles of 乀 stroke:

Start lightly, moving the pen down to the right from light to heavy pressure till the foot of the stroke, turn right, and end lightly with a sharp point.

The Inclined ‘na’ stroke is the third stroke of the 大 character.

The method of writing this ‘flat’ stroke is similar to the ‘Inclined’ stroke, but slightly flatter.

The flat ‘na’ stroke can be seen in the 这 character as the final stroke.

The 丶’dian’ stroke is as essential to a character as ‘eyes are to man’.

There are 4 styles of 丶’dian’ stroke:

Start lightly and wield the pen down to the right.

The right ‘dot’ is the first and final stroke of the 为 character.

Begin by exerting pressure then wield the pen down to the right.

家 has a ‘shu’ dian stroke in the top radical 宀 . There are several ways to write this stroke. These are shown in the images below:

The method for writing this stroke is similar to the ‘right dian’, but the direction is to left.

This is similar to the ‘right dian’ stroke, but longer.

Start writing heavily, then move the pen up to the right from heavy to light, and end with a sharp point. Depending on the character, the angle and length will be different.

Once you’ve perfected these rules, take a look at the second part of our article. 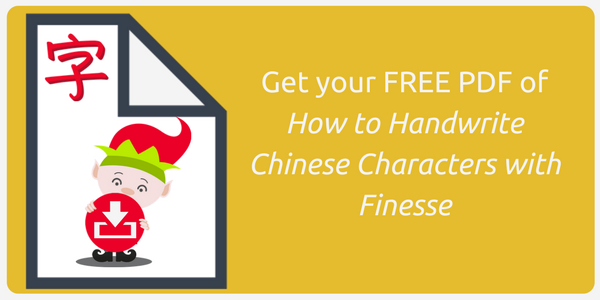