If you don’t have time to learn these words now, don’t worry! You can get How to say Merry Christmas and other Winter Holiday Words in Chinese PDF and study them later!

To get into the festive spirit, we thought you might like to learn some holiday words in Chinese. Christmas is becoming a popular festival to celebrate here in China, there are Christmas trees, tinsel and even carol singing!

Below, are 8 holiday words to learn, complete with example sentences and links to our dictionary. First, as promised, let’s learn how to say ‘Merry Christmas’ in Chinese.

The literal translation of Christmas in Chinese, is the ‘holy birth’. 圣 (shèng) is made up of the radical for earth 土 (tǔ) and right hand 又 (yòu), although the traditional character 聖 (shèng) also included the radical for ear 耳 (ěr).
诞 (dàn) means ‘birth’. 圣诞 (shèng dàn) is also used for the birth of Confucius.

I think the translation for Christmas Eve is a somewhat poetic one, and means ‘Silent night’ or ‘Peaceful Evening’. The character 平 (píng) and the character for apple 苹 (píng) are homophones. So, on Christmas Eve, Chinese people eat apples. The 安 (ān) character depicts a woman 女 (nǚ) under a roof 宀 (mián), suggesting that achieving peace requires a woman within the house. 夜 (yè) contains a person 人 (rén), under a roof 宀 (mián) at night 夕 (xī). You’ll notice that the radical for night appears as a character for New Year’s Eve.

The Chinese translation of Advent, the period of time before Christmas, is similar to the English meaning. 降临 (jiàng lín) means to ‘descend’ or arrive’.

New Year is a very literal translation ‘new’ and ‘year’. Eve, is a combination of the characters ‘former’ and ‘evening’ or the ‘evening before’.

New Year’s Resolutions are a common way to start the new year. In Chinese culture, all decisions are made with the heart, not with the brain, so the addition of 心 (xīn) with 决 (jué) meaning to ‘decide’ reflects the meaning of ‘resolution’, which is often a ‘firm decision’.

Whilst fireworks in the west are used for many festive occasions, including New Year’s Eve, in China, fireworks are restricted to Chinese New Year only.

光明节 (guāng míng jié) or Hanukkah is literally translated as ‘Bright light festival’.The character 光 (guāng) meaning ‘ray’ or light’ is a partial pictographic character of light, which also features the radical 兀 (wù) meaning ‘to rise’. 明 (明) is a similarly pictographic character containing both the moon 月 (yuè) and the sun 日 (rì). This character also pertains to enlightenment of the mind and the future. An alternative transliteration version of the holiday is 哈努卡 hā nǔ kǎ. 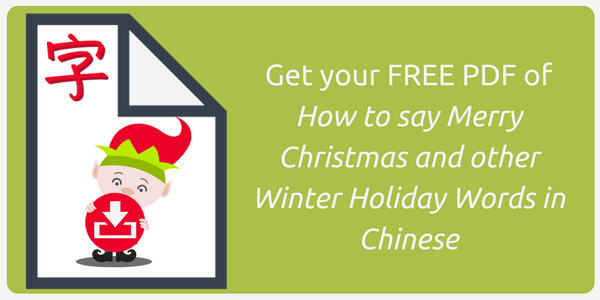