Let’s Get Abstract With Chinese Ideograms

If you don’t have time to read this article now, don’t worry! You can download Let’s Get Abstract With Chinese Ideograms PDF and read it later!

Simple Chinese Ideograms or Ideographs were the second type of character that were developed after pictographs. Pictographs are characters that look very similar to the word they describe, such as 口 ‘mouth’ and 手 ‘hand’. Ideograms, on the other hand are known as 指事 (zhǐ shì) or ‘indirect characters’ and are often symbolic characters depicting abstract concepts. Meaning, they are difficult to draw or express because they are often not a physical object.

Most of the time, these characters were developed from pictographs with additional lines and dots to create a new concept.

Below are some of the most common ideograms for you to learn:

Some of the simplest Chinese ideograms are numbers. The following characters originally use or used lines to symbolically represent a number.

Originally, this character was simply a horizontal line with a dot above it. The horizontal line represents the ground and the dot, or later the vertical line, symbolically suggests an ‘up’ direction.

晚上你过来吃晚饭吗？(wǎn shang nǐ guò lái chī wǎn fàn ma?) Do you want to come over to have dinner tonight?

上 (shàng) bigrams often refer to something being ‘on’ or ‘above’:

Similarly to 上, the horizontal line suggests the ground and the dot or line below it shows a ‘downward’ direction.

我想下去帮他拿东西。(wǒ xiǎng xià qu bāng tā ná dōng xi) I want to go downstairs to help her get something.

上 bigrams usually involve something being below or making a downward motion:

下来 (xià lai) to come down

Both of these ideograms were developments of the ‘tree’ 木 (mù) radical:

This character takes the pictograph character for ‘tree’ and with the addition of a line at the base of the character indicates the ‘root’ of a tree.

这本是你的书。(zhè běn shì nǐ de shū) This is your book.

This is the reverse of 本 and has an additional stroke at the top of the character to depict the ‘tip’ or ‘end’.

末 (mò) bigrams suggesting the ‘end’ of something:

刃 (rèn) comes from the ‘knife’ character 刀 (dāo) with the addition of a 点 stroke to suggest the ‘edge’ of a knife.

An additional line on the character for corpse 尸 suggesting the ‘foot’ of a body.

甘 is a combination of the mouth radical 口 and a ‘sweet’ thing in the mouth represented by the additional 一 ‘heng’ stoke.

The origin of this character is not completely known, although it is thought to have come from the character for 30  卅, which was said to be the length of 1 generation.

世 (shì) bigrams are associated with life and time:

在世 (zài shì) to be alive

The original description of this ideogram was a container used to catch the blood of livestock during a sacrifice.

The ‘sound’ character shows a ‘tongue’ sticking out of a mouth making a ‘noise’. The character 言 (yán) ‘words’ comes from similar origins, just with one more stroke. The meaning is that ‘words’ are spoken from the heart.

音 (yīn) bigrams often have something to do with sound:

寸 (cùn) shows a hand and a ‘marker’ pointing to the wrist which is approximately an ‘inch’ away.

If you have questions or comments, please leave them below! 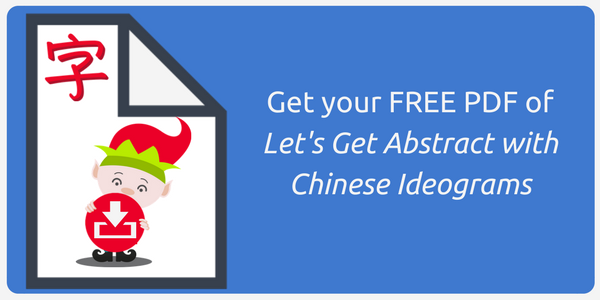