On September 9, 2015 By Hollie In Blog, Learner Tips, Radicals, Vocabulary

If you don’t have time to read the article now, you can just click here to download 土字旁: The Earth Radical PDF and read it later!

This is another in a series of articles that takes a closer look at a specific Chinese radical. Radicals are the ‘building blocks’ of the Chinese language and help students of Chinese to learn to read Chinese characters. The root radical shows us the meaning behind the character. For example, if a character has the ‘mouth’ radical 口 (kǒu) then we can assume that the character has something to do with drinking 喝 (hē), eating 吃 (chī), speaking 叫 (jiào) or even kissing 吻 (wěn)!

This time we’re looking at 土字旁 (tǔ zì páng) or the ‘earth on one side’. No, we’re not discussing the shape or dimensions of our earth, but the characters that are associated with the ‘ground’ and the radical 土 (tǔ).

土 (tǔ) is a great pictographic radical of a plant growing out of the ground (although if you have your own thoughts please share them with us here).

The most common uses of 土 are in the following bigrams:

The character 在 (zài) is made of the 土 (tǔ) radical and a variation of 才 (cái), which means ‘just now’ or ‘a moment ago’. 才 predominantly makes the pronunciation of the character (cái – zài) but also provides some meaning. I am AT (土) at a place JUST NOW (才).

Some good bigram examples of 在 (zài) are:

Originally, the character 也 (yě) which can be seen on the right-hand side of the character 地 (dì) represented a drinking horn. This drinking horn was a representation of a man’s possessions. Whilst 土 on its own, simply means ‘earth’, adding the 也 (yě) character creates a sense of value over the ‘land’ or ‘field’ that is owned by somebody. Another reading of the 地 (dì) character is that originally, the second radical was a snake and the snake was on or in the ground (土).

Some examples of 地 are the following:

地上有一个苹果。(dì shang yǒu yī gè píng guǒ.) There is an apple on the ground.

The radical 扬 (yáng) means ‘to raise’. If the soil is raised above the rest this could imply a place such as a stage or an arena in which to hold an event. 扬 (yáng) also provides the pronunciation to the character 场 (yáng – chǎng). Another meaning behind the 场 (chǎng) character is to look at the traditional character, 場. As you can see, above the character is the sun 日 (rì), suggesting that a ‘场’ (chǎng) was actually a place for farmers to dry their grain in the sun.

The 城 (chéng) character is made up of the 土 radical and the 成 (chéng) radical meaning ‘success’. My reading of these radicals is that a city is a ‘successful piece of land’. The 成 radical also gives the character its pronunciation – chéng.

The character for broken is made up of the 土 (tǔ) radical and also 不 (bù) which means ‘no’ or ‘not’. My understanding is that is something is ‘no’ longer of the ‘earth’ then it is ‘bad’ or spoiled.

The pictographic character 坐 (zuò) meaning to sit, has always made me smile because I see a smiling face. However, if you look closely (or maybe that’s just me), you can see 2 men ‘人 人‘ (rén) ‘sitting’ on the land (土).

Some useful examples of 坐 (zuò) are:

The 土 (tǔ) radical in this character makes a lot of sense to me but to really understand this character you need to look at the traditional character, 聖 (shèng). In the traditional character 壬 (rén) represents ‘man’ who is skilled and above average. A man 壬 (rén) with good listening skills (represented by an ear) 耳 (ěr) and good discourse (口 – kǒu) is a holy one. It was said in ancient China, that people with big ears (shown on the left side of the character) were incredibly wise and intelligent.

Here are some bigrams that include the character 圣 (shèng):

You can find examples of more radicals by scrolling to the bottom of the Online Dictionary. 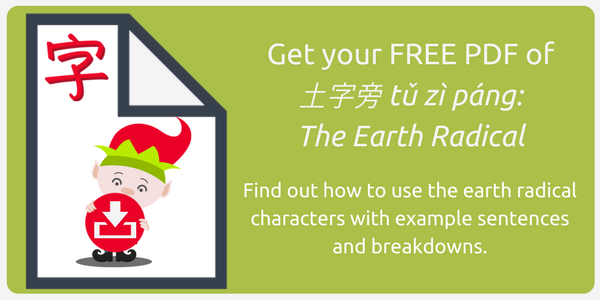