It will only take 4 minutes to read this post!

If you don’t have time to read this now, you can click here to download 中秋节: The Story of Chinese Mid Autumn Festival PDF and read it later!

What is Mid Autumn Festival?

After Spring Festival, 中秋节 (zhōng qiū jié) Mid Autumn Festival is the 2nd biggest Traditional Chinese festival. It is celebrated on the 15th day of the 8th lunar month which is usually somewhere between September and October.

One of the most important parts of Mid Autumn festival are the Moon Cakes 月饼 (yuè bǐng).

What are moon cakes, I hear you ask? Moon cakes are a densely filled pastry that represent the family unity and to emphasize this, are often shared among family members with tea during the holiday period.

Nowadays there a several different styles of moon cakes.

The following are some of the more traditional moon cakes:

五仁 (wǔ rén) – Five kernel: This is the one I’ve come across most often and has a filling made up of a mixed chopped nuts (at least 5 (五) different ones) combined in a thick sugary paste.

Many of the traditional moon cakes contain the 蛋黄 (dàn huáng) yolk of an egg to represent the moon.

These days, moon cakes have been transformed into a ‘cool’ and sometimes expensive treat that can even be bought in 哈根达斯 Haagen Dazs (hā gēn dá sī) and 星巴克 Starbucks (xīng bā kè). Many modern moon cakes have gotten rid of the dense fillings and replaced them with ice-cream, fruits and even seafood!

If you would like to learn how to make the more contemporary 冰皮月饼 (bīng pí yuè bǐng) ‘Snowy’ moon cake, you can follow our recipe here!

To understand a little more about the origins of Mid Autumn festival and why Moon Cakes so important and eaten during the holiday, you can read the story below.

The Story of Mid Autumn Festival

There are many stories about Mid Autumn Festival and its origins, but I’ve chosen this one since it encompasses the romantic ideals that this festival seems to have.

Originally, in ancient China, the sky had 10 suns. The heat from the sun’s caused a drought and all the plants to shrivel up and die. Fearing a catastrophe, the Emperor of China commanded his right hand man, and archer, Hou Yi 后羿 (hòu yì) to shoot down 9 of the suns, and leave only one. Hou Yi climbed to the top of the Kun Lun mountains 昆仑山 (kūn lún shān) and shot down 9 of the suns. When he returned the Emperor gave him a special pill that would grant him immortality. However, Hou Yi had a beautiful wife, named Chang’e 嫦娥 (cháng é), that he loved dearly and since he did not want to face immortality alone, he did not take the pill, but hid it away.

One day when Hou Yi was away from home, one of his students, Feng Meng, found the pill and tried to convince Chang’e, to give him the pill. Eventually, to stop Feng Meng from taking the pill himself, Chang’e swallowed the pill herself, flew up to the moon and become immortal.

Hou Yi was so saddened that he wife was gone that he burned incense 香 (xiāng), and gave food offerings. It is said that on Mid Autumn Festival, Hou Yi and Chang’e are reunited for a short time, which is why the festival is so family focused.

Due to the romantic nature of the story, it is common for many Chinese couples to get married during the Mid August festival period.

Don’t forget you can learn how to make your own moon cakes by following our Snowy Moon Cake Recipe here! 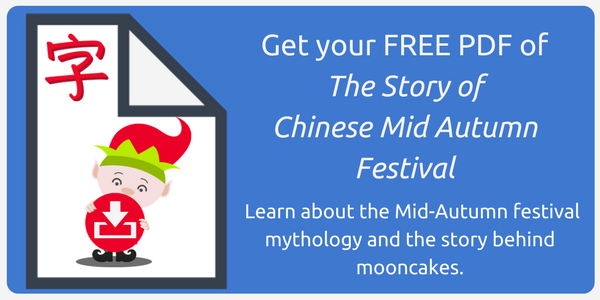