Neolithic China And The Beginnings Of Chinese Civilization

If you don’t have time to read this now, don’t worry! Just download Neolithic China And The Beginnings Of Chinese Civilization PDF and check it out later!

Chinese civilization 华夏文明 (huá xià wén míng) begins, according to records, with the creation of the Xia dynasty 夏朝 (xià cháo) in 2070 BC. Although the Xia dynasty was the first ‘civilization’ in China, there were people who lived on the land well before Yu the Great 大禹 (dà yǔ) established the Xia dynasty over 4000 years ago.

The Chinese for ‘Chinese civilization’ is 华夏文明 (huá xià wén míng). 文明 is civilization, but 华夏 (huá xià) comes from the original name for China and refers specifically to the Han Chinese. The 华 character means ‘magnificent’ and often referred to the clothes of the Chinese people. 夏 meant ‘grand’ and signified ceremonial etiquette in China.

As China entered the Neolithic period, different societies were emerging along the Yellow and Yangtze Rivers 江河 (jiāng hé). The people who lived in China during the Neolithic period around 5000-7000 years ago, built villages surrounded by trenches to protect the people from being attacked. The made highly decorated pottery, and tools for farming.

Banpo Village and the Yangshao

One such example is the Banpo Village 半坡村 (bàn pō cūn)  found near Xi’an 西安 (xī ān), which can be dated back to 4500 – 3750 BCE. These people were known as the YangShao 仰韶文化 (yǎng sháo wén huà) and from studying tombs, evidence of a hierarchical society can be found. Based on these discoveries, the YangShao appear to have been a matriarchal society, with 走婚 (zǒu hūn) ‘walking marriages’, of which there is only one surviving society like this in China today. Women were said to be the link between the people and the spirit world and acted as shamans.

In the east of China, in modern-day Shandong Province 山东 (shān dōng), the LongShan community 龙山文化 (lóng shān wén huà) appears on the lower end of the Yellow River 黄河 (huáng hé). Pottery from this region is very different from the Yangshao pottery that was dense, and elaborately decorated. The Longshan were known for black and undecorated pots, yet manufactured using a more sophisticated method than the Yangshao.

According to archaeological finds, pots made by the LongShan culture are found amongst the Yangshao and eventually all over northern China, suggesting that this one culture, the LongShan, begin to dominate the whole of the northern plains.

In the south, at the mouth of the Yangtze River 长江 (cháng jiāng), where modern-day Shanghai exists, another society named the Liangzhu culture 良渚文化 (liáng zhǔ wén huà) are creating elaborate pottery and it is within this culture that the earliest form of Chinese ‘characters’ are found. These marks are ‘ancestors’ of the written Chinese language that will eventually be used in China.

The emergence of bronze in China, around 4000 years ago, created another transitional period and introduced more powerful tools, beautiful jewellery and spiritual items and weapons.

It is at this point that the Xia appear as the first Chinese dynasty and Chinese civilization is first recorded. There are no written documents from the Xia dynasty, although there are many from the next dynasty, the Shang 商朝 (shāng cháo).

Archaeological discoveries show many distinguishing features of the Xia period including the emergence of palaces and large buildings. Most ordinary people, however, would continue to live in the more basic buildings, whilst these ‘palaces’ were kept for the ‘high-born’.

It is at this time that there is a surplus of grain, and so some people are able to undertake other tasks that are not farming. Some become craftsmen, warriors, political or spiritual leaders. Buildings were specially built for public spiritual performances and leaders were able to build up their political acumen within society. Spirits of nature and also of the dead ancestors or the current political rulers came to be divine powers. Public sacrifices were probably performed to please these ancestors. This system is said to have been established in the society of Erlitou 二里头 (èr lǐ tou), found in Henan province 河南 (hé nán), where elaborate palaces have been found.

The Mythology of the Xia Dynasty

According to mythology, Huangdi 黄帝 (huáng dì) and Yandi 炎帝 (yán dì) were chieftains of the tribes along the Yellow River around 5000-4000 BCE. Many inventions have been attributed to each, including medicine and agriculture to Yandi and Huangdi, vehicles and building skills. Huangdi is also said to have ‘requested’ the creation of Chinese characters, the calendar and arithmetic.

Many Han Chinese people still refer to themselves as being descendants of Huangdi and Yandi or 炎黄子孙 (yán huáng zǐ sūn).

The discoveries of tombs and communities dating back from the Neolithic period turned these myths into reality. Primitive characters were found etched on bone objects, and village planning showed knowledge of mathematics. Pot kettles shaped like ships were found at Banpo suggesting knowledge of shipbuilding.

These tribes expanded east along the Yellow River and soon defeated the Chiyou tribe. These three tribes, Huangdi, Yandi and Chiyou were eventually combined to become the first Chinese civilization.

After Huangdi and Yandi, came Yao 尧 (yáo), Shun 舜 (shùn) and finally Yu 禹 (yǔ), who were leaders of the Yellow River tribes. Floods were rampant during the period, and Yu had his people dredge the river and created an irrigation system to prevent further flooding.

Yu setup nine districts of China and named the capital Yangcheng 阳城 (yáng chéng) (today’s Dengfeng 登封 (dēng fēng)), as well as building roads, creating lakes and removing mountains. This helped break down divisions between the numerous tribes and unify them as the Chinese civilization known as the Xia dynasty.

It was also at this time, that the line of ruling succession was changed. Originally, succession was based on the abdication of the ruler, to allow another tribesman to take over. However, there are several stories that suggest Qi 啓 (qǐ), son of Yu fought king 益 (yì) of the Dongyi tribe 东夷 (dōng yí) and became the new king. In other stories, the people disliked 益 (yì) and elected 啓 (qǐ) who subsequently fought and beat the Dongyi. This established the hereditary line of succession that continued in many dynasties after.

Although the Xia dynasty lasted for over 400 years, the final Xia ruler was a tyrant and was eventually overthrown by Tang, the leader of the Shang tribe. The Shang dynasty also lasted for many centuries, and this is where we first see the documented history of ancient Chinese civilization.

From Yao to Mao: 5000 Years of Chinese History – The Great Courses Audiobook 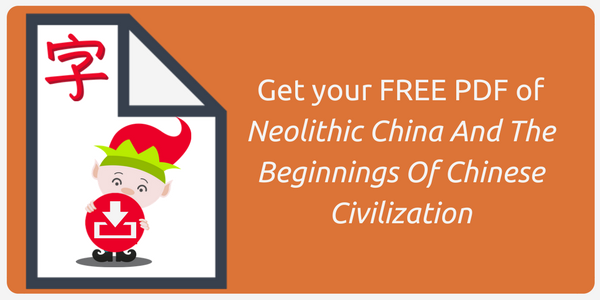